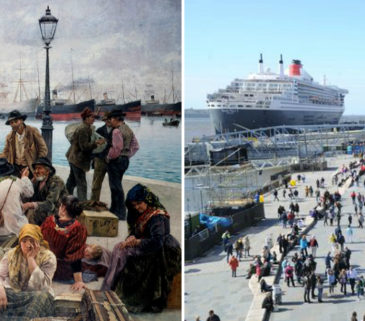 In previous articles, we have suggested that the Digital City does not have any specific location, but rather is constituted by the connections which the internet facilitates. Against this background, where the citizens are located might be regarded as essentially happenstance, but digitally they are all citizens of the same entity.

Recent research has confounded many people’s perceptions with the realisation that Liverpool now has the biggest proportion of fast growth firms of anywhere in the United Kingdom, to include London. We suggest that this is because the city is so attuned to the development of the digital world.

Uniquely, certainly for the United Kingdom and perhaps in the world, the character of the city was formed by people in transit, rather than a longstanding indigenous population. Liverpool expanded from a small fishing village in the 18th Century to a major port in the 19th Century. The expansion brought many people of different ethnicities into to the city and this effect was exacerbated when the Port became a major exit point from the old world into the new world, in particular North America. The character of the city can be judged from a piece in the Liverpool Mercury in 1887 which described the city’s atmosphere without any resistance to the use of stereotypes,

“The streets of Liverpool during the emigrant season present stirring spectacles of cosmopolitan animation, and the city itself is the temporary resting place of visitors from all parts of the hemisphere. Russians, suspicious and sullen, … Finns and Poles, men of fierce and haughty natures, … Germans, quiet and inoffensive, brave and determined … the flaxen-haired Scandinavians, paragons of nature’s handiwork, erect and stately.”

This great Port went into massive decline with the end of the empire, the disappearance of the traditional industries of North West England and the ravages of war. By the 1980s, its ultimate demise was confidently predicted. Significantly, the city’s incredible renaissance in the 21st Century has been driven by a similar process to its original growth that is by people in transit. These people are now tourists and cultural visitors. Many will be descended from the economic migrants, although no doubt considerably wealthier and less given to stereotypical presentations.

The character formed and regenerated by this process is complex, involving openness with strangers and a willingness to assist them, an acceptance of change, a lack of concern over financial security, and a disrespect for status and authority. It is easy to see how Liverpudlians could seamlessly become citizens of the Digital City. Of course, this exciting growth has to be seen against the background of a low starting point by contrast with other cities, in particular London. Whilst the Digital City exists in London, in particular at Silicon Roundabout, it does not appear, certainly at a distance, that the digital industry is characterised by originality or creativity. Rather, as with large parts of London, it appears to be in the psychological and financial paw of the global corporations, with its energy directed principally towards enhancing their lavish profits.

We have already argued that the Digital City should be regarded as a rebel city. If it has different neighbourhoods like most cities, it may have its affluent but ultimately rather staid districts, but also its much more stimulating bohemian quarters.