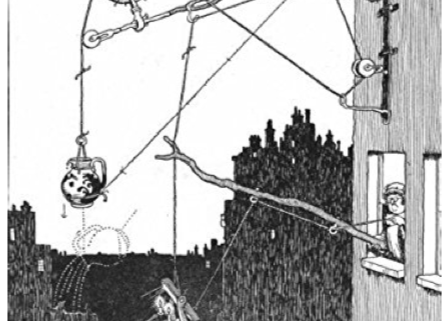 One of the many disconcerting features of getting older is when young people look blank as you mention the name of someone you regard as seminal. I have had recent experience of this with James Thurber, my favourite comic writer, and even Rex Harrison. Rex Harrison attended the same dance classes as my grandmother in Liverpool in the 1920s. Whilst I would not necessarily expect a millennial to be aware of this specific fact, it is nonetheless disturbing when someone has never even heard of him.

Although I have not yet tried, I would anticipate a similar reaction if I mentioned Heath Robinson. Heath Robinson was a cartoonist who was best known for his drawings of what Mark Bryant described as “ridiculously complicated machines for achieving simple objectives”. The popularity of his cartoons probably reflected interest in engineering in the Industrial Age and the English fondness, to use a good Yorkshire expression, of ‘Knackling’ machinery together. The humour was completed by a simple but absurd ultimate objective of the machine. Ridiculously complicated mechanisms were shown for “removing a wart from the top of the head” or “resuscitating stale railway scones for redistribution at station buffets”. My favourite creation was the “multi-movement tabby silencer”, which automatically threw water at serenading cats.

Heath Robinson died in 1944 and could not have guessed that he was to be an inspiration to the IT industry.

When we launched Complete Counsel just over two years ago, it was our intention to use digital technology for basic service provided by the support business so far as possible. Whilst we have been able to achieve an efficient and cost effective way using currently available software, it is clear to us that the available products do seem to have a Heath Robinson quality in terms of a degree of complication disproportionate to their value in terms of functionality. What we really need is a very simple programme which can receive Instructions and enclosures and transmit the same internally so that they can be worked upon efficiently and used in Court. Having spoken to a number of IT providers, the best I have achieved so far is an acknowledgment that this is “a good idea”.

More generally, complaints about the quality and functionality of IT systems appear to be everyday conversation in Chambers and law firms. The technology does not appear to have moved on in any substantial way since first introduced over 20 years ago and developments seem to occur in an ad hoc way. The IT industry has possibly based its business models on those of the operators of motorway service stations; there is no real incentive to offer something of high quality at a reasonable cost when there is demand for average quality at a high price.

What is often offered is an additional programme which in some ways will supplement and improve the basic programme. These packages are called ,possibly in deference to Heath Robinson , ‘bolt ons’. Whilst many of them are clever and slick, in practical terms they only offer a marginal improvement on the basic functionality at an additional cost.

So I continue to receive Instructions and enclosures in a number of different ways. I might be sent a large number of PDFs, often too many for one email. These PDFs are not necessarily clearly labelled ; usually they require considering and ordering before I can start work on them. It has to be acknowledged that this is better than receiving what appears, to all intents and purposes, to be a client’s entire file, sometimes over 2,000 long in one PDF. Some clients operate by permitting access to a secure platform within their own system. However, access to and use of this platform can prove cumbersome and time consuming.

One IT salesman suggested to me that the problem was rooted in the difficulty of claiming ownership of intellectual property in relation to software systems. This disincentivised time and money being spent on their development. This appears to be a paradoxical situation in which possible developers are deterred because the solution is such an obvious one.

It may be that the way forward would be for the Bar to consider collectively whether better IT provision could be achieved. Many practitioners are cynical about the effectiveness of the Bar Council in promoting the continuance of the Bar as a robust and independent profession. This objective could best be achieved by enabling barristers to become laptop lawyers, operating at minimal basic cost. Facilitating the financing of appropriate software to achieve this objective could be a reasonable aspiration for the Bar Council.