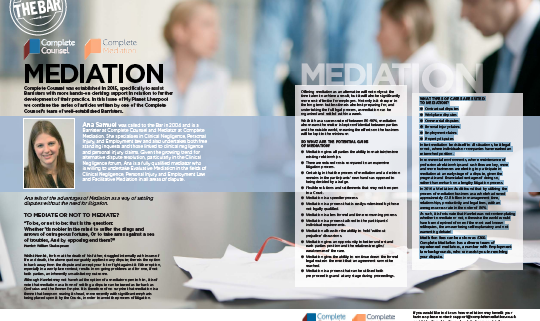 This article by Ana Samuel appeared in My Planet Liverpool in January 2018. View the PDF here

TO MEDIATE OR NOT TO MEDIATE?

“To be, or not to be: that is the question: Whether ’tis nobler in the mind to suffer the slings and arrows of outrageous fortune, Or to take arms against a sea of troubles, And by opposing end them?”

Whilst Hamlet, forlorn at the death of his father, struggled internally with issues of life and death, the above quote arguably applies to any dispute; there is the option to back away from the dispute and accept your lot or fight against it. Either option, especially in a workplace context, results in on-going problems and for one, if not both parties, an inherently unsatisfactory outcome.

Although Hamlet may not have had the option of a mediator open to him, it is of note that mediation as a form of settling a dispute can be traced as far back as Confucius and the Roman Empire. It is therefore of no surprise that mediation is a theme that keeps on rearing its head, more recently with significant emphasis being placed upon it by the Courts, in order to avoid the process of litigation.

Offering mediation as an alternative will not only cut the time taken to achieve a result, but it will also be significantly more cost-effective for employers. Not only is it cheaper in the long term but less time is also lost preparing for, and undertaking the full legal process, as mediation can be organised and settled within a week.

While it has a success rate of between 80-90%, mediation also means the matter is kept confidential between parties and the outside world, meaning the effects on the business will be kept to the minimum.

SO WHAT ARE THE POTENTIAL GAINS OF MEDIATION?

WHAT TYPES OF CASES ARE SUITED TO MEDIATION?

In fact mediation lends itself to all situations, be it legal or not, where individuals or companies have reached an entrenched position.

In commercial environments, where maintenance of professional relationships and cash flow are key, more and more businesses are electing to participate in mediation at an early stage of a dispute, given the pragmatic and financial advantages of doing so, rather than embark on a lengthy litigation process.

In 2016 a Mediation Audit found that by utilising the process of mediation business as a whole had saved approximately £2.8 billion in management time, relationships, productivity and legal fees, with an average success rate in the order of 86%.

As such, it is fortunate that Hamlet was not contemplating whether to mediate or not, otherwise the world would have been deprived of one of the most well known soliloquies, the answer being self-explanatory and not warranting debate!

Mediation fees can be as low as £200. Complete Mediation has a diverse team of experienced mediators, a number with Employment Law backgrounds, who can assist you in resolving
your dispute.