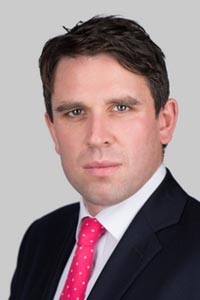 Though this truism was scribed by Plato around 380 BC in his seminal work on justice, ‘The Republic’, little has changed.  Fraudulent personal injury claims are a booming business.  You only have to open the tabloid press on any given day and you are likely to see the photograph of a smiling sun-tanned holidaymaker posing by a large plate of seafood with a headline above it informing that that ne’er-do-well will be spending 18 months at Her Majesty’s Pleasure for fraudulently claiming gastroenteritis whilst in Corfu.

Prior to the coming into force of section 57 of Criminal Justice and Courts Act 2015, if a Defendant suspected that the claim they were defending was fraudulent they had to rely on CPR r3.4(2) (b) or the court’s inherent jurisdiction to have the claim struck out as an abuse of process.  Where the claim was founded on an obvious falsity such as an RTA where CCTV showed it did not actually happen this was relatively straight forward, but what about cases involving exaggeration?  Convincing a Judge that an exaggeration claim should be struck out for fraud was a herculean task.

The reason for this was outlined in Summers v Fairclough Homes Ltd [2012] 1 WLR 2004 where the Supreme Court commented; first, that such an application should only be granted as a last resort because it was a draconian step that would deprive a claimant of a substantive right to a fair trial; second, if fraud was found then Judges could account for it in their assessment on liability and quantum in the ordinary way; and third, there were other ways to punish and/or deter claimants for making fraudulent claims such as: orders for costs, reduced interest, proceedings for contempt and criminal charges.

(1) This section applies where, in proceedings on a claim for damages in respect of personal injury (“the primary claim”)

(a) the court finds that the claimant is entitled to damages in respect of the claim, but

(b) on an application by the defendant for the dismissal of the claim under this section, the court is satisfied on the balance of probabilities that the claimant has been fundamentally dishonest in relation to the primary claim or a related claim.

(2) The court must dismiss the primary claim, unless it is satisfied that the claimant would suffer substantial injustice if the claim were dismissed.

(3) The duty under subsection (2) includes the dismissal of any element of the primary claim in respect of which the claimant has not been dishonest.

(4) The court’s order dismissing the claim must record the amount of damages that the court would have awarded to the claimant in respect of the primary claim but for the dismissal of the claim.

(5) When assessing costs in the proceedings, a court which dismisses a claim under this section must deduct the amount recorded in accordance with subsection (4) from the amount which it would otherwise order the claimant to pay in respect of costs incurred by the defendant.

The section came into force on 13 April 2015, and was the Parliamentary response to the fear that lying, through seriously false claims, undermined the administration of justice in the eyes of the public.  In drafting the legislation in the way that it did, Parliament specifically rejected the former line of jurisprudence, that it is in principle more appropriate to penalise a fraudulent claimant as a contemnor than relieve the defendant of what the court has held to be a substantive liability (Lord Clarke in Summers at §61).

Instead, though severe, the language of s.57 provided “[95]…that in a case where such a claim has been exaggerated by a “fundamentally dishonest” claimant, the court is to dismiss the claim altogether, including any unexaggerated part, unless satisfied that substantial injustice would thereby de done to him… [96]  Severe as the rule is, these considerations demonstrate that there is  no occasion to depart from its very long-established status in relation to fraudulent claims, properly so called… Nor can there be any room for the rule being in some way limited by consideration of how dishonest the fraud was, if it was material in the sense explained above, that would leave the rule hopelessly vague” (Versloot Dredging BV v HDI Gerling Industrie Versicherung AG [2017] AC 1 §95-95).

The key words in the section are “fundamental dishonesty”.  Unhelpfully, nowhere in the section, nor the statute for that matter, did Parliament seek to define what fundamental dishonesty actually means in respect of this Act.  It was not an unfamiliar term however.  With the introduction of qualified one-way cost shifting (QOCS), CPR r44.14 had introduced the phrase as part of an effort to deny the fraudulent claimant protection from defendant costs.  Within the body of case law dealing with this subject matter, the case of Howlett v Davies [2017[ EWCA Civ 1696 cited with approval the County Court judgement of His Honour Judge Moloney QC in Gosling v Hailo (29 April 2014) stating that the phrase had to be interpreted purposively and contextually so that it distinguished between two level of dishonest: dishonesty which was not fundamental (QOCS would still apply), as opposed to dishonesty which was fundamental (QOCS dis-applied).  In particular, at §45, HHJ Moloney QC stated “The corollary term to ‘fundamental’ would be a word with some such meaning as ‘incidental’ or ‘collateral’.  Thus, a claimant should not be exposed to costs liability merely because he is shown to have been dishonest as to some collateral matter or perhaps as to some minor, self-contained head of damage.  If, on the other hand, the dishonesty went to the root of either the whole of his claim or a substantial part of his claim, then it appears to me that it would be a fundamentally dishonest claim: a claim which depended as to a substantial or important part of itself upon dishonesty.”

There is, however, a clear distinction between the wording of s57 and CPR r44.16 (aside from the amount of costs to be recovered).  This rule states that the court must be satisfied that the ‘claim’ is fundamentally dishonest, whilst in s57 it is the claimant. In practical terms whether this makes a difference remains to be seen, only in the most limited of circumstances would a situation arise where a claim would be found to be fundamentally dishonest without the same finding being made against the claimant.

Developing a model for s57

It was only in December 2017 (judgment released in January 2018) that the High Court gave guidance on the provisions of s57 ‘fundamental dishonesty’.  In London Organising Committee for the Olympic and Paralympic Games (in Liquidation) v Sinfield [2018] EWHC 51 (QB), Mr Justice Knowles ruled that a volunteer injured whilst working at the London Olympics had exaggerated his special damages by creating a fictitious £14,000 claim for gardening assistance that represented 28% of the whole of his claim (42% of his special damages claim), and that the exaggeration was one which was fundamentally dishonest.  Giving general guidance Mr Justice Knowles set out the following principles:

Hopefully, now armed with Mr Justice Knowles’ guidance, defendants can have confidence that where they have evidence of a fundamentally dishonest claimant they will more likely than not be spared the upfront cost, time and effort of having to settle matters at trial.

Join Lorraine Mensah for a short session on this hot topic.

Lorraine was appointed Immigration Judge in 2007.

She provides specialist advice in the areas of European law and specifically rights for workers, Nationality issues, Immigration applications both under Appendix FM and the Points based system, deportation and Human Rights and has acquired significant experience in this field.

Followed by drinks and a chance to discuss the issues. 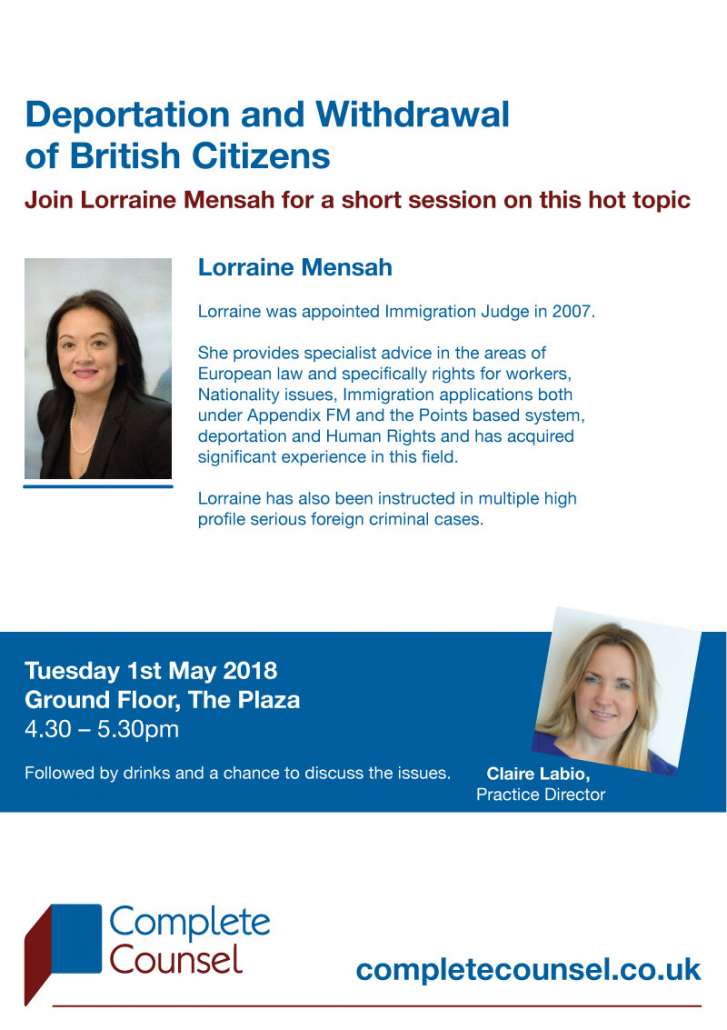 A general update and specific issues including:

Followed by drinks and a chance to discuss the issues.

Charles Feeny has been invited to speak at the 2018 Social History of Medicine Conference
“Conformity, Resistance Dialogue and Deviance in Health and Medicine” at the University of Liverpool in July 2018. Charles Feeny will be participating in a round table discussion on Primodos chaired by Jesse Olszynko-Gryn of the University of Cambridge. Primodos was a hormone based pregnancy testing drug used in the 1960’s and 1970’s .

A Group of parents whose children suffered birth defects after the use of Primodos have resolutely campaigned for the manufacturers Bayer Schering and the Government to accept the damage caused by Primodos and the failures in transparency and regulation that led to the drug not been withdrawn sooner. Charles has been retained to advise the parent group.

The Primodos case is attracting considerable publicity and widespread support from members of parliament. Recently the Health Minister, Jeremy Hunt, announced that there would be a review of the regulatory issues raised by history of Primodos.

Other participants at the round table discussion include Jason Farrell of Sky News who has campaigned for transparency in relation to Primodos, Maria Lyon, leader of the victims group, and Dr Neil Vargesson of the University of Aberdeen who is undertaking ground breaking research which it is hoped, with appropriate financing, will finally prove the link between Primodos and birth defects.

The conference is to be held in July and further details of the conference and workshop will follow in due course.